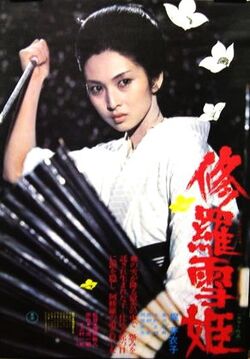 Lady Snowblood is a Japanese samurai film directed by Toshiya Fujita and starring Meiko Kaji. "Lady Snowblood" is based on the manga of the same name and it is also the film that heavily inspired Quentin Tarantino to write and create "Kill Bill".

A dying mother named Sayo Kajima, gives birth to a newborn girl named Yuki. Before she dies, she says her child was "born for revenge." Twenty years later, Yuki, raised as a cold-blooded assassin/serial killer, sent herself out to kill/assassinate Shirayama Genzo for a man named Matsuemon in order for him to help her find three former gang members. It was revealed through flashbacks that Sayo Kajima, her husband Tora Kobayashi, and their son Shiro, were walking down the road in Koichi Village until they were attacked by a gang of thugs thinking Tora was part of the new government. Three out of the four gang members killed Tora in cold blood while the only female member of the four killed Shiro. The three men then took Sayo and raped her in a barn nearby.

After their assault, one of them took Sayo with him to Tokyo so she may serve him at will. Taking this opportunity, she killed the the man that took her to Tokyo and she was imprisoned for life. While in prison, she seduced the men to give birth to a child so that the child could extract her revenge on the gang that killed her family. Months later, Yuki, was born and Sayo dies of childbirth. Otora, one of the other women in prison, took Yuki and raised her with a priest named Dōkai. Dokai trained Yuki to be a skilled assassin/serial killer, so that she may avenged her mother's death. Many years later, Yuki and Dokai believes that she is ready for her journey of vengeance for her family and she takes off on her journey of revenge.

Takemura Banzō is living a normal life after the killing of Tora Kobayashi. He now has a daughter named Kobue, who is a prostitute and Takemura achieved debts by gambling his way through bets. Yuki finds Takemura's daughter one day throwing away handmade chikufujin over the cliff and Yuki follows her back to her town as she can lead Yuki to Takemura. Yuki joins in on a gambling game and is surprised to see Takemura arrive and making bets as well. During the game, Takemura was caught cheating and was ordered to go into the other to receive pain, misery, and death as punishment. Before Takemura was about to be killed/slain by the other angry gamblers, Yuki enters the backroom and stops them from torturing/harassing him saying that she did not catch him cheating.

After they released him, Yuki met with Takemura again in a small diner and she asked him if he could go with her to another location. When Takemura asked where they would go, she told him to a place where he belongs. Yuki led him to a nearby beach where she started to threaten him with her sword, which hidden in her umbrella/parasol. Confused, Takemura begged for no reason. Yuki revealed to him that she is the daughter of Sayo Kajima. After realizing what this was about, Takemura got on his knees and begged for mercy and forgiveness. He told Yuki that he has a daughter and what could she do on her own? Without showing any remorse, Yuki slashed at Takemura with her sword, killing him in cold blood as his body/corpse fell onto the water. Yuki then dragged his body/corpse to the cliff where she met Kobue and threw his body/corpse over the edge.

After learning that Tsukamoto Gishiro, the main member of the four group of gangs, has died in a ship wreck, Yuki went to the cemetery/graveyard to see if it was true. As she saw his grave, she drew out her sword and sliced at the mounted flowers and the tombstone in anger. As she left the cemetery, another man entered the cemetery/graveyard walking to the same tombstone. Matsuemon told Yuki he knew about this event three years before she started her quest for revenge.

To calm herself down, Yuki traveled around the town. The man who was at the cemetery/graveyard to see Gishiro's grave was also in town and saw Yuki. He decides to follow her to know why she was angry at the tombstone. However, Yuki knew she was being followed/stalked and she showed herself the man by appearing to him by surprise. The man revealed himself as Ryūrei Ashio and that he is a reporter and also a writer. He wanted to write about Yuki's past due to what he saw of her at the cemetery/graveyard. Yuki refused to tell him her story. However, seeing this as a chance for Kitahama Okono, another member of the gang, to reveal herself, Dōkai told Ryūrei Yuki's story.

Ryūrei wrote a few articles on Yuki and her past. This caused the special force police and Kitahama Okono herself to arrive at Ryūrei's place and torture him for Yuki's location. While refusing to tell Okono Yuki's location, Yuki arrived in time to save him from being killed. Yuki battled against many of Okono's men and chased Okono around the estate. Eventually, Yuki and Ryūrei finds Okono's body/corpse hanged within a room. Without any idea if it was suicide or murder, Yuki uses her sword to cut/slice her body in half to extract her revenge.

The next day, Ryūrei is about to write another chapter of his book about Yuki until Gishiro revealed himself to Ryūrei. Ryūrei realized that he faked his death in order to achieve more wealth and power for his own individual good without the share for anyone else. Gishiro leaves Ryūrei's place telling him to stop writing the story and stay out of his way. Yuki soon enters and Ryūrei tells her that he is still alive and that Gishiro is Ryūrei's father. Surprised, Yuki and Ryurei travels out for the final and last kill.

Chapter 4: The House of Joy, The Final Hell[edit | edit source]

Yuki and Ryūrei learned that Gishiro is at a masquerade ball and they take a carriage to the House of Joy. While at the party, Yuki spots Gishiro enter a backroom. Yuki follows/stalks him and is attacked by Gishiro as he knew he was being followed/stalked. A fight/battle between Gishiro and Yuki broke out and ended after Yuki cut off his hands with her sword. Ryurei entered the room and examined the body/corpse. He realized that the person Yuki killed was a decoy as the dead man was wearing a mask that resembled the face of Gishiro. Yuki then hears a sound from behind the mirror in the room. Ryūrei throws a chair at the mirror and Gishiro was hiding behind the mirror and watched the fight/battle. Both Ryūrei and Yuki chased after him going up separate staircases.

In the end, Ryūrei caught up with Gishiro on the main floor balcony and wrestled with him as they both fought for the revolver that Gishiro drew. During their struggle, Ryūrei manages to push Gishiro against the wall and hold him in that position. Unfortunately, Gishiro manages to shoot Ryūrei, but Ryūrei still holds Gishiro to the wall. Yuki swing across to their balcony and Ryūrei ordered Yuki to kill Gishiro. Yuki, after a moment of hesitation, did what he demanded and Ryūgei died by Yuki's blade. Gishiro, wounded and near death, still manages to shoot Yuki in the lower chest after she slashed his throat in order to finish him off.

Yuki, now bleeding and limping in pain, exits the palace. Kobue arrives to the palace and sees Yuki. After knowing what Yuki did, Kobue stabs Yuki in the chest with his dagger and then runs away. Yuki then falls down on her face as she faints. The film ends with the next day sun rising and Yuki opens her eyes witnessing the day.

Retrieved from "https://killbill.fandom.com/wiki/Lady_Snowblood?oldid=8561"
Community content is available under CC-BY-SA unless otherwise noted.