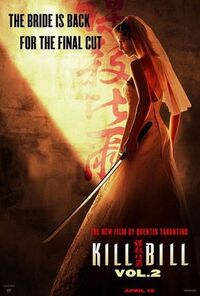 Kill Bill: Vol. 2 is the second half of the "Kill Bill" movies.

Flashbacking 4 years ago, to the day the Massacre at Two Pines occured. During a wedding rehearsal, Beatrix and Tommy Plympton, along with a group of family friends, decide on the details of the wedding. Beatrix, fully pregnant, takes a break and finds Bill on the balcony of the chapel. The two share some tendered moments, and evantually they go inside, where Bill is introduced as Beatrix's father.

As Tommy walks away, the two kiss, and Bill takes his seat at the bride's side. Moments after, the four members of the Deadly Viper Assassination Squad enter the building, and kill all those who were present.

Beatrix after attempting an attack on Budd one night at his trailer following soon after Bill's forewarning is shot full of rock salt in the chest and sedated in the buttocks with a needle by Budd. Budd then ties Beatrix up and along with his pint sized friend Ernie takes her out to a local Texan Cemetary and buries her in the empty grave of Paula Schultz.

Beatrix is buried with a flashlight in the wooden coffin ending the second chapter sequence the lonely grave of Paula Schultz which begins with Budd going to work at the Go Happy Go Strip Joint in Texas.

While she is buried in Paula Schultz's coffin, Beatrice recounts her first time being told about the Great White Lotus Ninja Pai Mei by Bill.

She then is enrolled for training by Pai Mei and goes under extremely cruel and psychically demanding training methods which make her an incredibly strong fighter.

He teaches her how to punch a hole through solid wood and how to eat with chopsticks.

The end of the chapter then sees Beatrix break out Paula's coffin with the punch wood technique and head for a nearby diner where she purchases a glass of water for dehydration.

Elle Driver speeds to Budd's camper with a red briefcase full of money. Meanwhile, Beatrix traverses the large, sandy mountains that surround the camper. She arrives at the hill overseeing the camper at the same time Elle pulls up to it. Inside the trailer, Elle deceives Budd as she has secretly stashed a Black Mamba snake within the money in the red suitcase she has brought.

The Black Mamba bites Budd several times on the face and its poison kills him within 10 minutes as Elle describes the black mamba's poison to him in his final moments. She regrets that Beatrix supposedly met her end at the hands of someone like him.

Elle is then called by Bill in which the she lies to him claiming Budd was killed by a Black Mamba Beatrix stashed in his camper.

As she hangs up she collects her money, scattered all over the ground by the Black Mamba and skirmish, and kicks the camper door open only to be pushed back in by Beatrix who has reached the caravan.

The two battle and Beatrix wins by using Pai Mei's eye gouge trick which he had previously used on Elle in her training to leave with one eye.

Beatrix having now removed Elle's last eye watches as she in rage and blindness tears up everything around her.

At an eventual point Beatrix drops Elle's cleanly gouged out and eye and squishes it with her feet before taking back her Hattori Hanzo sword and exiting the camper with a bang ending the chapter.

The Last chapter begins with a sorrowful song over a grassy landscape as Beatrix travels to a small hut brothel run by a former father figure of Bill's named Esteban Viahio.

Esteban points Beatrix towards a nearby villa where Bill is as Bill had asked Esteban to give his location away.

Beatrix arrives at the Villa with a gun in hand and the Sword on back but is horrified as she comes across Bill to find her daughter next to him.

She plays along with them for a while until she puts B.B to sleep by watching Shogun Assassin with her and then goes to join Bill.

Bill tells of his favourite superhero and compares the hidden identity crisis and power problems with Beatrix.

Beatrix then having being shot with an anaesthic needle by Bill gains control of her limbs and joins him outside at a backyard table.

The two discuss the motive behind the planned assassination of her and everyone.

She then utters her battle beginning line: You and I Have Unfinishes Buisness and Bill swipes at Beatrix beginning a chair donned battle.

She gives a sorrowful goodbye as he takes five steps into the backyard to his death and then goes to collect B.B.

The chapter ends with Beatrix getting in her blue car with B.B and starting the engine before the scene is taken to the Next Morning sequence.

"Kill Bill: Volume 2" was released in theaters on April 16, 2004. It was originally scheduled to be released on February 20, 2004 but was rescheduled. "Variety" posited that the delay was to coincide its theatrical release with "Volume 1"'s release on DVD.[2] In the United States and Canada, "Volume 2" was released in 2,971 theaters and grossed $25.1 million on its opening weekend,[3] ranking first at the box office and beating fellow opener "The Punisher". "Volume 2"'s opening weekend gross was higher than "Volume 1"'s, and the equivalent success confirmed the studio's financial decision to split the film into two theatrical releases.[4] "Volume 2" attracted more female theatergoers than "Volume 1", with 60% of the audience being male and 56% of the audience being men between the ages of 18 to 29 years old. "Volume 2"'s opening weekend was the largest to date for Miramax Films aside from releases under its arm Dimension Films. The opening weekend was also the largest to date in the month of April for a film restricted in the United States to theatergoers 17 years old and up, besting "Life"'s record in 1999. "Volume 2"'s opening weekend was strengthened by the reception of "Volume 1" in the previous year among audiences and critics, abundant publicity related to the splitting into two volumes, and the DVD release of "Volume 1" in the week before "Volume 2"'s theatrical release.[5]

Outside of the United States and Canada, "Volume 2" was released in 20 territories over the weekend of April 23, 2004. It grossed an estimated $17.7 million and ranked first at the international box office, ending an eight-week streak held by "The Passion of the Christ".[6] "Volume 2" grossed a total of $66.2 million in the United States and Canada and $86 million in other territories for a worldwide total of $152.2 million.[3]

Retrieved from "https://killbill.fandom.com/wiki/Kill_Bill:_Vol._2?oldid=8357"
Community content is available under CC-BY-SA unless otherwise noted.