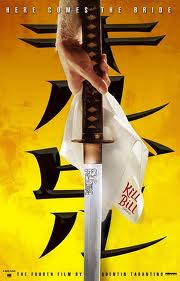 Kill Bill: Vol. 1 is the first half of the "Kill Bill" movies.

Beatrix Kiddo arrives at the location of the second member of her Death List Five, Vernita Green. The two engage in a hand-to-hand fight, destroying Vernita's living room. The fight is stopped due to the arrival of Vernita's daughter, Nikkia Bell, who is introduced to Beatrix and is told to go to her room. The two former assassins take a coffee break, during which Vernita apologizes for her doings in the past, and asks for mercy. When Beatrix refuses to forgive, Vernita attempts to shoot her with a hidden gun in a Kaboom cereal box, only for Beatrix to dodge the bullet and throw a knife which kills Vernita. Nikkia witnesses her mother's death, and is told by Beatrix that if one day Nikkia will want to avenge her mother's death, she will be waiting. Beatrix then leaves in a yellow pick-up truck.

A flashback reveals the Massacre at Two Pines that occurred during Beatrix and Tommy Plympton's wedding rehearsal, in which the members of the Deadly Viper Assassination Squad murdered all those present at the chapel. Beatrix, the only survivor of the massacre, goes into a coma. Elle Driver, one of the assassins, arrives at Beatrix's room and intends on injecting her with poison, only to be stopped by a phone call from Bill, who claims Beatrix deserves a more honorable death.

Four years later, Beatrix awakens from her coma to find that she is no longer pregnant. At this point, she believes that her unborn child did not survive. She attacks and kills Buck, an orderly in the hospital that has been raping her and selling her body to other men, one of whom she also kills. She then steals the keys to Buck's pick-up truck, the Pussy Wagon.

While attempting to wiggle her big toe, Beatrix tells the story of O-Ren's past. When O-Ren was 9 years old, she witnessed her parents' deaths by a Japanese crime lord named Boss Matsumoto and his accomplices. After both of her parents were slaughtered, her house was burned down. O-Ren swore revenge, and killed Matsumoto when she was 11 years old, thanks to the fact he was a pedophile. 9 years later, O-Ren became a well-known assassin, carrying out international missions.

A year after the Massacre at Two Pines, Bill financed O-Ren and helped her become the head of the Yakuza.

Chapter 4: The MAN From OKINAWA[]

Beatrix booked a one-way ticket to the island of Okinawa, Japan. She tracked down a legendary swordsmith, Hattori Hanzō, who also crafted Bill's sword. While pretending to demonstrate her lousy Japanese, Beatrix revealed her true reason for arriving at Japan: finding him. Although Hanzō at first was hesitant, he agreed to forge Beatrix her sword after learning of the "vermin" she intends to kill. The sword Hanzō made for Betrix was considered by himself the best katana sword he has ever made.

After exploring O-Ren's personal team (which included Sofie Fatale, Gogo Yubari, and Johnny Mo), Beatrix arrived at Tokyo, where she tracked O-Ren down at her hangout location known as the House of Blue Leaves. While in the restroom, Beatrix recognizes Sofie's cell phone ringtone, the same one she had while she was present at the massacre. Calling out O-Ren's name, Beatrix chopped off Sofie's arm, and challenged O-Ren for a fight. O-Ren sent Gogo and her personal army, the Crazy 88, to defeat Beatrix, yet they all failed.

Following O-Ren, Beatrix faced her in the snowy garden of the club. O-Ren ridiculed Beatrix's abilities and intentions, and refused to believe Beatrix's sword was crafted by Hanzō. After a short duel, Beatrix sliced off the top of O-Ren's head, with her final words confirming Beatrix's sword to be one of Hanzō's.

After killing O-Ren, Beatrix made Sofie tell her all the information about the remaining Deadly Viper Assassination Squad. After doing so, Beatrix dropped Sofie off to a nearby hospital, where Bill visits her. He then asks Sofie if Beatrix knows her daughter is still alive, ending the movie on cliffhanger.

Quentin Tarantino intended to produce "Kill Bill" as one film. With a budget of $55 million, production lasted 155 days. Harvey Weinstein, then co-chief of Miramax Films, was known for pressuring directors to keep their films' running times short. When Tarantino began editing the film, he and Weinstein agreed to split the film into two. With the approach, Tarantino could edit a fuller film, and Weinstein could have films with reasonable running times. The decision to split "Kill Bill" into two volumes was announced in July of 2003.

"Kill Bill: Volume 1" was released in theaters on October 10, 2003. It was the first Tarantino film in six years since "Jackie Brown" was released in 1997.[7] In the United States and Canada, "Volume 1" was released in 3,102 theaters and grossed $22 million on its opening weekend.[8] It ranked first at the box office, beating "School of Rock" (in its second weekend) and "Intolerable Cruelty" (in its first). "Volume 1" was the widest theatrical release of Tarantino's career to date,[9] and it was also his highest-grossing opening weekend to date. Previously, "Jackie Brown" and "Pulp Fiction" (the latter released in 1994) had each grossed $9.3 million on their opening weekends.[7] Paul Dergarabedian, president of Exhibitor Relations, said "Volume 1"'s opening weekend gross was significant for a "very genre specific and very violent" film that in the United States was restricted to theatergoers 17 years old and up.[9] According to the studio, exit polls showed that 90% of the audience was interested in seeing the second volume after seeing the first.[10]

Outside the United States and Canada, "Kill Bill Volume 1" was released in 20 territories. The film outperformed its main competitor "Intolerable Cruelty" in Norway, Denmark and Finland, though it ranked second in Italy. "Volume 1" had a record opening in Japan, though expectations were higher due to the film being partially set there and having homages to Japanese martial arts. The film had "a muted entry" in the United Kingdom and Germany due to being restricted to theatergoers 18 years old and up, but "experienced acceptable drops" after its opening weekend in the two territories. By November 2, 2003, it had made $31 million in the 20 territories.[11] "Kill Bill Volume 1" grossed a total of $70 million in the United States and Canada and $110.9 million in other territories for a worldwide total of $180.9 million.[8]

For "Volume 1", review aggregator Rotten Tomatoes gives the film a score of 85% based on reviews from 218 critics and reports a rating average of 7.7 out of 10. It reported the overall consensus, "Kill Bill is nothing more than a highly stylized revenge flick. But what style!"[12] At Metacritic, which assigns a weighted average score out of 100 to reviews from mainstream critics, the film received an average score of 69 based on 43 reviews.[13]

A. O. Scott of "The New York Times" said Tarantino's previous films "Pulp Fiction" and "Jackie Brown" were "an exploration of plausible characters and authentic emotions". He wrote of "Kill Bill Volume 1", "Now, it seems, his interests have swung in the opposite direction, and he has immersed himself, his characters and his audience in a highly artificial world, a looking-glass universe that reflects nothing beyond his own cinematic obsessions." Scott attributed "the hurtling incoherence of the story" to Tarantino's sampling of different genres that include spaghetti westerns, blaxploitation, and Asian action films. The critic summarized, "But while being so relentlessly exposed to a filmmaker's idiosyncratic turn-ons can be tedious and off-putting, the undeniable passion that drives "Kill Bill" is fascinating, even, strange to say it, endearing. Mr. Tarantino is an irrepressible showoff, recklessly flaunting his formal skills as a choreographer of high-concept violence, but he is also an unabashed cinephile, and the sincerity of his enthusiasm gives this messy, uneven spectacle an odd, feverish integrity."[14]

Manohla Dargis of the "Los Angeles Times" called "Kill Bill Volume 1" "a blood-soaked valentine to movies" and wrote, "It's apparent that Tarantino is striving for more than an off-the-rack mash note or a pastiche of golden oldies. It is, rather, his homage to movies shot in celluloid and wide, wide, wide, wide screen—an ode to the time right before movies were radically secularized." Dargis said, "This kind of mad movie love explains Tarantino's approach and ambitions, and it also points to his limitations as a filmmaker," calling the abundance of references sometimes distracting. She recognized Tarantino's technical talent but thought "Kill Bill Volume 1"'s appeal was too limited to popular culture references, calling the film's story "the least interesting part of the whole equation".[15]