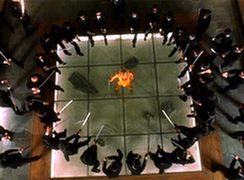 The House of Blue Leaves was a Japanese bar and the headquarters of O-Ren Ishii and the Crazy 88 during the time of the arrival of Beatrix Kiddo.

The Crazy 88, Gogo Yubari, Sofie Fatale and O-Ren Ishii were positioned on the top floor room overseeing the Blue Leaves Pond Area which stood the ground for the crossing execution of O-Ren Ishii by Beatrix Kiddo Black Mamba via the means of the Hattori Hanzo Sword and was the same means for the Massacre Of The Crazy 88, The Bodyguard and Johnny Mo.

The House Of Blue Leaves also the night of its appearance played host to a performance by the 5,6,7,8's I Walk Like Jayne Mansfield, I'm Blue and Woo-Hoo.

It was proprietor by the Charlie Brown remarked look alike and his controlling but equally fearful wife.

It is positioned close to the city limits of Ducati which serves for the purchase of the gleaming yellow Ducati Motorcycle purchased by Beatrix Kiddo in transportation to the House of Blue Leaves in Tokyo, Japan.

O-Ren Ishii following the murder of the bad mouthed taboo insinuating Yakuza Boss travels along with personal bodyguard Gogo Yubari, assistant Sofie Fatale and many of the Crazy 88's to the restaurant and bar the House of Blue Leaves for a night of celebration of being elected the new Yakuza Leader of Japan.

They are soon upon arrival out of fear pampered by the proprietors and escorted to the apartment room of the upper floor which oversees the pond area garden.

They are soon then delivered refreshments under continuous abuse from the Crazy 88 as they divulge their many dirty stories to enjoy the celebratory night.

Beatrix soon arrives and begins to inconspicuously purchase refreshments from the bar as the performing band plays.

Beatrix firstly travels upstairs to the above landing and waits outside the slide-a-way paper door but is heard by the hearing and battle trained Ishii who sends Gogo outside to investigate.

The Bride leaps upward onto the rafter and positions herself painfully while Gogo comes to the realization of no ones presence.

Soon Beatrix travels back downstairs and into the lavatory next to the highly chemical processed kitchen.

Beatrix then begins to relinquish many of her combat heavy clothing and is soon alerted by the Fatale phone ring heard at the Two Pines Wedding Chapel during her savage beating and opens the door a crack to spot Sofie Fatale in japanese conversation with Bill.

Beatrix Kiddo then punches Sofie in the face and drags her back to the lobby. In fluent Japanese bestowed by Hattori Hanzo in his training of Beatrix, calls out O-Ren. Reciting the Unfinished Buisness causing her, Gogo Yubari and the Crazy 88 to appear on the balcony, and watch as Beatrix lowers her Hattori Hanzo upon Sofie's right arm severing it. Leaves her bloody wounded body upon the floor.

O-Ren then sends the first Crazy 88 member upon her. He is killed and implanted in the small jacuzzi spa.

Soon after the brutal death of a second, third, fourth and fifth member, she sends the entire set of Crazy 88 members upon her. They are killed, mistakenly leading Beatrix to believe that they are finished. So she asks for more subordinates to murder in her way.

That is when Gogo challenges The Bride to a duel.

Gogo Yubari, armed with a meteor hammer, declines Beatrix's offer to walk away and spare her death, and begins to swing the sphere, attacking Beatrix.

Beatrix struggles greatly with Gogo as she cuts and wounds her and then begins to strangle her with the meteor hammer. But with the case of Gogo's weapon used against her, and the use of a wooden plank with pin nails, she is able to overcome, wound, and then murder her with a blow to the head. Causing her eyes to bleed lines and her to have the plank implanted in her as she falls to the ground.

Beatrix then advances upon her standing spot to converse with O-Ren, but hears the coming of hurrying vehicles. Engaged in conversation with O-Ren Ishii learns of the rest of the Crazy 88 army coming to attack and protect her.

Beatrix is circled shortly after Johnny Mo storms the Blue Leaves and slices and swirls across the floor to clear the space before gouging out eyes, decapitating heads, dismembering legs and arms to reach the staircase.

She is then sent into a small area where the female proprietor and Charlie Brown's wife shuts the light off, causing a blue light effect as she kills more of the Crazy 88.

After eliminating all but one shaky soldier, the lights are returned, and she sees he is nothing more then a zealous teenager.  Beatrix then proceeds to spank him with the Hattori Hanzo sword. Telling him "This is what you get for messing around with yakuzas" before banishing him out, and being advanced on by Johnny Mo and the final Crazy 88 members.

She kills them in brutal fashion and dismembers Johnny's arm, murdering him. Which also sends him down into the blood spa below causing the final splash. Then, she tells all the remaining Crazy 88s to go, but that they should leave their sliced off limbs behind. As Sofie leaves, Beatrix tells her to stay where she is.

Beatrix then proceeds to the apartment room and out the final sliding doors to the pond garden area.

Beatrix then confronts O-Ren Ishii who esquires to the impressiveness of her sword and asks of its origin.

Beatrix tells it is Hattori Hanzo steel. O-Ren says she is lying. Beatrix corrects her with the sight of the Hattori Lion upon the blade.

O-Ren firstly in combat overpowers Beatrix sending her backwards and to the snow covered ground. Remarking that she does not know how to fight, or the requirements needed to hold the sword she possesses.

Beatrix then gets to her feet and calls on the final confrontation, which O-Ren accepts. O-Ren is swiped across the kneecap sending blood into her white lace sandal leaving her to apologize for her ridicule of her abilities.

Beatrix and O-Ren then engage once again. Finally after emerging from the picket fence, O-Ren is sliced across the temple severing her scalp revealing her brain and leaving her mounted top upon the ground.

Beatrix then reenters the restaurant and tells the surviving Crazy 88's that they are free to escape without any attack. But on the one and only condition of leaving their severed limbs behind as they belong to her now. Except for the still active Sofie who is sprawled on the floor. She gets dumped in the truck of a commodore. Bill and the others are told to leave, with a message which explains why she was not murdered for having her involvement in a simple wicked life.

After the events that took place, it is unclear what happens to the House of the Blue Leaves. Because of the bloodshed that occurred, it probably closed down.

The following songs Jayne Mansfield and I'm Blue are available for replay on Kill Bill. Vol 1 Special Features under the menu The 5,6,7,8's and all three songs heard in the first installment are found on the soundtrack of both volumes supplied by Quentin Tarantino and RZA.