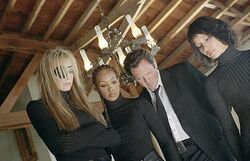 The Deadly Viper Assassination Squad is the main antagonist organization in "Kill Bill".

The Deadly Viper Assassination Squad was a group of assassins led by Bill. The group was composed of 2 men and 4 women: Bill, Budd, Beatrix Kiddo, O-Ren Ishii, Vernita Green, and Elle Driver.

The Codenames of all members but Bill are the names of snakes. Bill's codename is Snake Charmer and hence signifies him as the leader of the squad.

After discovering she was pregnant, Beatrix Kiddo quietly left the vipers. Beatrix intended to settle down and start a new life in El Paso, Texas. Upon learning she was still alive, Bill tracked her down and ordered the remaining vipers to storm the chapel and kill everyone except Beatrix. Each of the four beat the helpless Beatrix and stood over her body, while Bill approached Beatrix and shot her in the head.