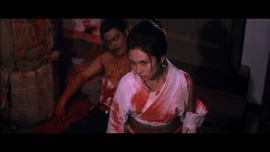 Chapter 3: Umbrella of Blood, Heart of Strewn Flowers is the third chapter in Lady Snowblood. It introduces Ryūrei Ashio and has Yuki Kajima face one of her most difficult challenges yet in this bloody story.

Yuki Kajima, after hearing from Matsuemon that Gishiro Tsukamoto has died on a ship wreck on a trip to America three years ago, Yuki did not believe a word he said. Instead, Yuki travels to the cemetery to see for herself if the information was true. When she arrived at the cemetery, she was Tsukamoto's tombstone. Out of anger, she drew out her sword and cut the flower heads off and cut the side of the tombstone as well, causing her blade to split in half. As she leaves the cemetery, another man walks into the cemetery and goes to Tsukamoto's tombstone as well. The man was surprised to see the flowers cut and knew that the woman that walked passed him is involved.

Yuki returns home to Matsuemon and his group to have supper but she did not say a word or have a bite to eat. Auntie, a good friend of Matsuemon and Yuki, was talking with Matsuemon about how Matsuemon knew the story but didn't know that Tsukamoto was one of Yuki's targets before she embarked on her bloody quest for vengeance. Auntie tried to cheer Yuki up by talking to her but Yuki explained that Tsukamoto was the leader of the four and that she longed to kill him herself. Okora then yelled at Yuki telling her to be stronger than that. Auntie then asked Matsuemon if he knew where Okono Kitahama was. Matsuemon told her that his men are trying hard but they can't seem to find her. Yuki then left to walk around the town nearby to get some fresh air.

The Man of Threats[edit | edit source]

During her walk, the man from the cemetery was following her from behind. Yuki knew she was being followed and led the man to a small alleyway and surprised him by appearing next to him. The man then told Yuki that he is finally able to meet her and immediately asked her why did she react the way she did at the cemetery. Yuki started to walk away telling him that it is none of him business. The man they introduced himself as Ryūrei Ashio and tells Yuki that he is a reporter for "The People's Paper" and he is also a writer full of curiosity. Yuki realizes that Ryūrei wants to know more about her and she tells him to leave her alone from now on because his curiosity for her may cost him his life. Ryūrei still tries to receive information from Yuki, but she tells him to leave her alone one last time before she walks away.

Some time later, Ryūrei is seen within his home and he starts to write the story of Yuki. He writes about her mother, Sayo Kajima, and how Yuki is on the hunt for vengeance. After he prints multiple copies of this story, it becomes popular it Japan as many readers are purchasing the papers to read the story of Yuki Kajima.

Back at the Dōkai's training house, he revealed to Yuki that he was the one to told the story of Yuki. Yuki, shocked and surprised, asked her master why he would do such a thing to her. He explains that since Ryūrei's story is getting popular, Kitahama will eventually know about the story and will take action. Dōkai is using Ryūrei's story as bait for Kitahama to reveal herself and give Yuki the time to kill her last enemy. Yuki then asks Dōkai if Kitahama will really show herself. Dōkai told Yuki that she must be patient and see.

Back at Ryūrei's house, Kobue Takemura is asking Ryūrei if the story of Yuki truly is fiction. Ryūrei replied to her that it is all real. Kobue then realizes that Yuki really did kill Banzō Takemura. Kobue broke out into tears while crushing the printed story of Yuki with her hands. Ryūrei then commented that there is now another girl seeking vengeance. Ryūrei tells Kobue that she and Yuki were both born under "unlucky stars" and they she and Yuki are the same. Kobue, angry by what she just heard, attempted to leave his home telling him that he has no idea how she feels. Ryūrei stops her from walking out the door and tells her that he does.

Before Ryūrei can explain how he knows how Kobue is feeling, the police opens his house door. Kobue runs in between the police and escaped. Ryūrei tried to chase after he but the police grabbed him and pulled him inside the house. The police told Ryūrei that his story of Yuki is far too real for it to be just a story and they told him that they need him to go with them down to their headquarters. After Ryūrei's negative remark, the police officers yanked him outside of the house, tied his hands and forced him to follow the other officer. Kobue, hidden in the shadows, witness Ryūrei's arrest and went to Matsuemon's place.

Auntie, while walking across the house hall, noticed Kobue outside. After Kobue introduced herself to Auntie, she told her that she does not want to see Yuki. Instead, she came to inform them that Ryūrei has been arrested and he was taken to Kagetsu. Kobue then quickly left the scene while Auntie tried to call her back but Kobue was gone.

While in a attic at an abandoned house at Kagetsu, Ryūrei has his hands tied behind his back and he is being beaten by the police while they ask him for the location of Lady Snowblood. After no reply, Okono Kitahama enters the attic and tells Ryūrei that the stories are real and there is not he could have gotten the information without speaking to Lady Snowblood herself. Ryūrei, bruised and beaten, tells Kitahama that she finally reveals herself. Ryūrei then taunts Kitahama saying that the murder the she committed twenty years go on Tora Kobayashi paid for such a wasteful hideout. Angry by his remark, Kitahama beat Ryūrei with bamboo sticks until she had enough and told her guards to continue to punish Ryūrei.

After the guards beat Ryūrei, Kitahama told them to stop and keep him alive so Lady Snowblood could arrive. Kitahama then went into her shrine room and started to pray. Meanwhile, outside of Kagetsu, Yuki's umbrella flies into the front lawn. Four guards went to check the umbrella and when they turned around, Yuki was kneeling on top of the building's side-roof. Kitahama, still praying, is interrupted by one of her guards who came to inform her that Yuki has arrived.

Two guards rushed to attack Yuki, but she quickly killed both of them. She was then surrounded by many more guards and a fight between her and the guards broke out. During the fight, one of the guard managed to cut Yuki across he arm. Not being a serious injury, Yuki killed all of the guards and entered the restaurant looking for Kitahama.

While on the ground floor, Kitahama was injured but eventually her guards entered the restaurant to help. Yuki drew a Thunder-Sand Bomb hidden in her hair and threw it to the bottom floor. As the room started to be filled with red smoke, the guards screamed at each other to hold their breaths. Kitahama left the scene while Yuki jumped down and killed all of the guards with her sword. After the fight, Yuki heard Ryūrei cough from above and she finds out that he was still alive. Yuki then examines all of the bodies and realized that Kitahama escaped.

Yuki and Ryūrei then ran around Kagetsu searching for Kitahama. They eventually found her hanged by the neck in another building. Kitahama was dead but neither Yuki or Ryūrei know who killed her. To extract revenge and to be sure that Kitahama was truly dead, Yuki approached her body and cut her in half.

Yuki and Ryūrei return home after Yuki fixed the bullet wound on Ryūrei's shoulder. Once back, Yuki speaks to Dokai and he tells her it is over and tells her that she should live a normal life. Yuki told him that she feels strange. She asks if it was truly over. Dokai told her that this is what she was supposed to feel and asked her if she, a child from the netherworlds, can live a normal live.

Back at home, Ryūrei is writing the fourth chapter in his book about Lady Snowblood. However a rickshaw stops outside his home and the man from the carriage with his guards enter. The man sits down on a chair across from Ryūrei and Ryūrei knew that this day would come. Ryūrei knew that the man sitting across from him was Gishiro Tsukamoto. After the man denied Ryūrei's accusations, Ryūrei continued to explain that the ship wreck did happen, but Tsukamoto took that opportunity to escape the police as they were searching for Tsukamoto due to opium smuggling. The man laughed and said to Ryūrei, "You haven't changed at all since you ran away ten years ago."

Ryūrei asked the man, Tsukamoto, why has he come to Ryūrei. Tsukamoto told Ryūrei that he came to make sure that Ryūrei forgets about Tsukamoto and tells him that his story of Lady Snowblood is at an end after Kitahama's death. Tsukamoto then tells Ryūrei that he fears a war within Japan is coming and he is smuggling to help expand the Japanese empire. He also tells Ryūrei that he knows Ryūrei wants justice to be paid. But he orders Ryūrei to stay out of his way before he leaves off on his rickshaw.

Ryūrei explains that after he found out that one of Yuki's targets was his father, Ryūrei wanted to tell Yuki the truth but kept it from her because he thought Tsukamoto was dead. But after Kitahama died, Ryūrei knew that Tsukamoto killed her and that is when he decided to let Yuki know. Ryūrei then rips the pages of his Lady Snowblood story and told Yuki that he going to stop writing.

Yuki, with a surprised look on her face, realized that Tsukamoto is in fact still alive and she has a chance to kill him herself. Yuki then thinks about her mother and family history before she sets out for the final kill.

Retrieved from "https://killbill.fandom.com/wiki/Chapter_3:_Umbrella_of_Blood,_Heart_of_Strewn_Flowers?oldid=7798"
Community content is available under CC-BY-SA unless otherwise noted.