"I will neither forgive nor spare you." -Yuki Kajima to Banzō Takemura.

Crying Bamboo Dolls of the Netherlands 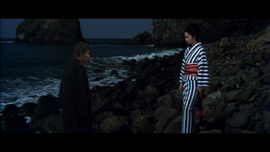 Chapter 2: Crying Bamboo Dolls of the Netherworlds is the second chapter in Lady Snowblood. It is the start of Yuki Kajima's journey of revenge and she will begin with hunting down Banzō Takemura.

The Next Life[edit | edit source]

Banzō Takemura, twenty years after the death of Tora Kobayashi, is trying to live a new life with his daughter Kobue Takemura. Kobue is inside a hut making chikufujin until she hears her father coughing in the other room.

Worried for her father, she enters the other room and tells him that he should not have any fear as they will make money by selling her chikufujins as she claims that they are in high demand. Takemura laughs and allowed her to leave the hut as he remains inside.

As Kobue left, she went to the edge of a nearby cliff and started to throw all of her chikufujins over the edge. After she throws her last one, she turned around only to see Yuki Kajima staring at her. Kobue explains that she threw them over the edge because no one will purchase them and it is better to get rid of them than save them for useless space. Yuki told Kobue that she will not tell anyone what she saw.

Kobue smiled and begand to descend the cliff and started to return home. Before Kobue left, however, she have a bamboo-knit hairpin to Yuki as a small friendly present. As Kobue started to walk away, Yuki asked her what Kobue's name was. After Kobue told Yuki her name, Yuki realized that Kobue is Takemura's daughter and Yuki decides to follow Kobue as she can lead Yuki to Takemura.

Kobue is now seen within a man's house with two people giving her yen for her to do her "best service" for someone really important. At the same time, Takemura hears a knock on the door. He pulls out his dagger thinking it was someone dangerous, but it was only his friends telling him that they now represent the House of Hamakatsu for gambling.

They also show Takemura his eighty yen overdue rates and explain that Kobue is not selling her chikufujins. Instead, she is selling her body for the money for their family. In denial, Takemura was angry and did not believe their words. After some persuasion, Takemura decided to attend a gambling event where he can try to win money so her daughter could not be the only one supporting the family.

At the gambling house, Yuki was there hoping Takemura would arrive. When the gamble was about to begin, Takemura entered the room surprising Yuki. Throughout the game, Yuki constantly stared at Takemura due to her rage and temptation to kill him. Yuki was making great bets while Takemura was making bad ones. Takemura then decided to cheat as an attempt to try to win back his depts. However, the judge noticed his actions during the course of his gambles and told him to go into the back room while Yuki watched him leave.

Once in the back, many angry gamblers were torturing Takemura with knives telling him that his cheating was wrong and stupid. One of the men was about to kill Takemura as punishment until Yuki arrived in the room and stopped him from doing so. Later the judge entered and Yuki explained that she did not catch Takemura cheating and he should not receive any punnishment. After Yuki's explanation, the judge and the other gamblers decided to let Takemura go.

Takemura leaves the back room and Yuki quickly follows him while carrying her sword hidden within her umbrella. Before Yuki could go through the same door as Takemura exited from, she was seen by Kobue, who was walking down the parlor stairs. Before Yuki left, she told Kobue that if anything should happen to her, she should go to Tokyo and have a better life there. Kobue told Yuki that she cannot leave because she has a father and she wants to stay. Yuki then left thinking about Kobue's words.

Takemura was at a small diner drinking tea while Yuki was staring at him from behind. Takemura noticed her and told her that it would not have mattered if he lived or died due to his past.He also told Yuki that his daughter also keeps him alive and he greatly appreciates that factor. Takemura then asked Yuki why she helped him escape. Yuki told him that because they have "A little business to take care of.". He then asked him to leave with her. When Takemura asked where, she told him a place where he truly belongs. She then told him to start his journey of death.

Yuki and Takemura are now at the beach that is near the cliff where Yuki first saw Kobue. Confused, Takemura asked for an explanation of why they are outside. Yuki told Takemura that it is typical for him to forget something that happened in the past.

Yuki brought back the fact that he, along with Gishiro Tsukamoto, and Tokuichi Shokei killed Tora Kobayashi. Still in denial of ever doing such a thing, Yuki then revealed that she is the daughter of Sayo Kajima.

Shocked by what he just heard, Takemura then got on his knees and begged for mercy saying that everything he did many years ago was not by his purpose. Takemura claimed that the other three made him perform all of those actions in the past. Yuki doesn't believe a word he says. Takemura, still on his knees, begs for forgiveness. Yuki draws out her sword and takes off his robe. Scared by what she might do, Takemura tells Yuki that if he dies, Kobue will be left alone. If Yuki kills Takemura then Kobue will have nothing. Without hesitation, Yuki slices Takemura diagonally across the chest and his body lands in the water as the blood flows from his body to the sea.

After Takemura has been killed, Yuki drags his body up onto the top of the cliff and disposes it by throwing his body over the edge and into the sea.

Retrieved from "https://killbill.fandom.com/wiki/Chapter_2:_Crying_Bamboo_Dolls_of_the_Netherworlds?oldid=7738"
Community content is available under CC-BY-SA unless otherwise noted.