"You were born for vengeance. Such a poor child. A child from the netherworlds" -Sayo Kajima to Yuki Kajima 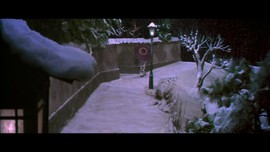 Chapter 1: Vengeance Binds Love and Hate is the first chapter in Lady Snowblood. It covers the back story of Sayo Kajima and her daughter Yuki Kajima. It also sets the story of revenge in motion explaining why Yuki is on the quest for revenge.

A dying woman is about to give birth to her child within the Tokyo Prison for women. Surround by other women, the dying mother gives birth to the child and names her Yuki Kajima after looking out the cell window and seeing the heavy snow falling from the sky.

She tells the child that she was born for vengeance and that she is a child from the netherworlds. The mother then looks out the window once again into the snowy night sky and closes her eyes.

Twenty years later, a woman with an umbrella is walking alone down the snow-filled street. She stops and hides at a wall as she hears a carriage coming. The carriage had three guards and one main man, Shirayama Genzō, sitting on the carriage itself.

The woman steps out from the wall to get in the carriage's way. After the woman refused to move out of the way, the angry guards withdrew their swords and pursued to kill her. However, the woman quickly reacted and killed the first guard with her sword hidden within her umbrella.

The other two guards realized that she was an assassin. They drew out their swords but the woman still managed to kill both of them without difficultly. Shirayama jumped off his carriage seat, drew out his sword, and charged at her but he too was no match as she stabbed him through the chest with her weapon. Bleeding and dying, Shirayama asked who she was. The woman simply replied, "Revenge." The last words Shirayama asked was for her name. She answered, "Lady Snowblood". Shirayama shortly died and Lady Snowblood walked away in the snow.

Lady Snowblood enters a lonely village asking the townspeople if they know anyone by the name of Matsuemon, the leader of an underground organization. At first the villagers did not reply. But some of the men laughed and asked her to go with them as they will lead her to Matsuemon.

After a few seconds of the battle, Lady Snowblood was about to draw out her sword and possibly start killing them to show that she very serious about her business. Before any blood could be shed, Matsuemon appeared from the forest and told the men that she was an important woman and they need to stop the fighting. Matsuemon explain that Lady Snowblood is a helper because she killed Shirayama Genzō, the man who tried to destroy their village by bankrupting them of resources and yen. After Matsuemon's explanation, the men moved away from Lady Snowblood and he invited her over to his hut so they can talk.

As a flashback, Sayo Kajima, her husband Tora Kobayashi, and their son Shiro Kajima, are walking down the path within Koichi Village. Shiro runs off ahead to play in the open field until a man on a bell tower rings the bell after he spotted Sayo and her family. Sayo called out to Shiro to return to her but it was too late as Okono Kitahama grabbed Shiro and Banzō Takemura, Gishiro Tsukamoto, and Tokuichi Shokei approached Tora after they threw Sayo to Kitahama.

The small gang believed that he was part of the new government officials because he was wearing white. Tora tried to convince them that he was dressed nice because he was a teacher in a nearby town. The men did not believe any of Tora's explanations and Tsukamoto slashed Tora diagonally across the chest with his katana.

Takemura then stabbed Tora in the stomach with his knife and then Shokei stabbed Tora in the bad with his spear while Sayo and Shiro witnessed the event taking place. Tora fell to his knees and asked why they did such a thing. Tora then fell onto his chest, dead, while his body began to bled out blood.

Sayo used force to release herself from Kitahama's grasp and she ran to Tora's body crying as her husband was killed. As she is kneeling on his bloody corpse, she looks up at the four members of the gang with an angry face. The four look down upon Sayo and eventually made plans for her and Shiro as well before they end their day.

Months later, Sayo is within the Tokyo Prison about to give birth to her child, Yuki. Okora, another prisoner, told Sayo that her child is overdue and Sayo must relax or else she could die. Sayo told Okora that she does not care if she lives or dies. As she screams in pain, Sayo remembers the day of her husband and son's murder. She remembers that she was taken into a nearby barn and was raped by the Takemura, Shokei, and Tsukamoto while Kitahama watched. After the short flashback, Yuki was born and was lying on the bed next to Sayo.

Sayo then explained to Okora and Okiku the story of the four gang members. She explained that the three convinced the villagers of Koichi Village that draftees could be excluded from service if they pay 270 yen to them. They received over thousands of yen. After receiving the money they fled. Shokei had a strong affection for Sayo and he made her go to escape to Tokyo with him where she worked as a waitress and a personal servant for Shokei.

Taking this opportunity, Sayo seduced Shokei one night and killed for revenge him by stabbing him in the back. However, this action caused Sayo to have a lifetime term in prison. Sayo then explained that she was weak and could no longer extract her revenge upon the other three members of the gang. Sayo wanted a child. From Ichigaya Prison to Tokyo Prison, she had sex with many men so that she may have a child. Eventually, she got pregnant with Yuki and told the other female prisoners that this child will extract her revenge for her. A dying Sayo told Okora to take care of her child as she is gone. As Sayo dies, the other females gasp is terror and Yuki cries.

Sometime later, Okora was released from prison and she took Yuki in her care. She took Yuki to a priest named, Dōkai, where he trained her in the ways of martial arts, athletic abilities, and discipline. He was training her to become an assassin as he filled her childhood with thoughts of vengeance for her mother. Yuki, now eight years old, was training with Dōkai everyday. She performed a barrel roll test where she would hide within a rolling barrel to try to stay within it. She also had sword training with Dōkai.

However, one night during sword training, Dōkai told Yuki to get rid of her sword and practice dodging his attacks. During this exercise, Dōkai cuts off Yuki's clothes and cuts her arm. Feeling a little bit of pain, Yuki became stronger and realized what kind of person she must be in order to satisfy her master. From that moment on, she succeeded in the barrel roll test and was able to put up a good fight against Dōkai.

Lady Snowblood is now at the shrine of Sayo Kajima and Tora Kobayashi praying over them. It revealed that Lady Snowblood is Yuki and she vows to have revenge on the remaining three members for what they to her family. After Yuki prays to her parents, she gets up and walks away on her quest for revenge.

Retrieved from "https://killbill.fandom.com/wiki/Chapter_1:_Vengeance_Binds_Love_and_Hate?oldid=7736"
Community content is available under CC-BY-SA unless otherwise noted.