Beatrix's sword was the only sword Hattori Hanzō made after his retirement and supposedly the greatest samurai sword ever forged.

Although Hanzō swore a blood oath to not make another sword ever again, he is convinced by Beatrix Kiddo to make a final sword, for the purpose of killing Bill. Hanzō notes that this sword is his greatest creation.

Despite being made for killing the Death List Five, the sword is only used to kill one of them (O-Ren Ishii and also most of her subordinates) and had not a big role in the killing of the four remaining members. The sword is not involved in any way in the killing of Vernita Green (is presumed to be in the backseat of the Pussy Wagon) and Beatrix lost it while attacking Budd in the first time. When she recovered again, Budd was dead and Elle blinded. The sword had a minor role in the killing of Bill, only to defend Beatrix from the attack of Bill's katana.

Beatrix's sword has a 3 themed color palette: black, yellow, and white. It is long and gracious, like the owner. It has a carved Japanese lion on the top, a symbol of bravery. It has a black scabbard. 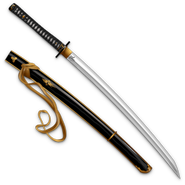 Sword
Add a photo to this gallery
Retrieved from "https://killbill.fandom.com/wiki/Beatrix%27s_sword?oldid=8294"
Community content is available under CC-BY-SA unless otherwise noted.